The primary objective of PBWM.ru is to publish information, analyses and opinions with world-wide coverage adjusted for specific local aspects. Strategy analysis, performance assessment for various financial tools, new products, mergers and acquisitions, taxes and law, interviews, tips and insights from marketeers, profiles of companies as well as a newsfeed filtered to reflect the topic in question — all of these aspects have been put in place to create a holistic information platform for the entire sector.

The portal was built on the foundation laid by the WEALTH Navigator magazine, a publication that has been tracking all transformations in the private banking & wealth management industry since 2008 covering such topics as changes in customer behaviour, generation of demand for new investment ideas, capital management services and response of millionaires to the existing supply.

All of these topics as well as other aspects of private banking & wealth management services are covered in the framework of the PBWM.ru project in real-time in front of a live audience.

PBWM Media and MEDIACRAT, in the person of publisher and managing partner Arman Jilavian, received the Media Manager of Russia 2011 award for successful management of specialized thematic media projects.

The award was presented for the outstanding progress demonstrated by SPEAR’S Russia magazine and PBWM.ru website which quickly became the most reputed and distinguished media for private banking & wealth management industry professionals and clients.

SPEAR’S Russia is the Russian version of the most trustworthy and influential British magazine for the world’s richest audience. PBWM.ru is a specialized online private banking and wealth management gateway.

Creative and commercial management of both projects is provided by MEDIACRAT.

PBWM.ru portal and Deloitte have launched the Tax Guide, a special information and consulting project.

The Guide is aimed at high net-worth individuals and their consultants and touches upon the principle terms and rules that can address various tax concerns efficiently. PBWM.ru is a specialized online private banking and wealth management gateway. Founder – PBWM Media, General Director – Dmitry Gafin. 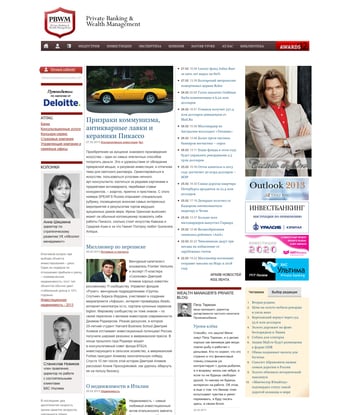